George Bell is the marketing manager at Sanctus, a mental health coaching facility based in London. Here, he shares his battles with depression and suicidal thoughts. He decides to quit work and learns that the freedom of travelling helped him get his life back on track.

Travelling was something I’d never really thought about doing before. I’d had plenty of holidays and have seen more than my fair share of countries all over the world; the generic ‘I’m off to Thailand for a gap year’ thing just didn’t really appeal to me. But after a particularly tough couple of years suffering from depression, I kind of realised life’s too short.

It’s cliche, but it’s true. There is a terrible stigma surrounding mental health. I’ve learnt through my own journey of the underwhelming lack of understanding and support out there. Depression isn’t just about ‘feeling a bit sad’ as it’s all too often described. I managed to completely lose my mind. I didn’t know what month it was. Or know what my own name was. Physically, I couldn’t get out of bed for weeks. I was throwing up every single morning. Any task that required more effort than showering was impossible. I’ve no shame in admitting that I thought about suicide more times a day than I care to remember.

This went on every single day for months and months and months. My doctors, therapists and parents had no idea what to do, so it was easier to just give up. It was never about attention-grabbing; we all like to think we’re mentally tough enough to avoid depression. But the sad fact is that statistics show we all either have a mental health issue. Or know someone that does; regardless of sex, race, religion, sexuality and ‘mental toughness’. Statistics show that suicide is the single biggest killer of men under the age of 45 in the UK. So suicide is a huge problem that men, especially are scared of talking about in case they look weak and less masculine. I learnt that depression isn’t just a mental problem; I had more than 50 very real, very scary physical symptoms over the last two years (Yes, 50!).

Thankfully, after a lot of hard work on my part. And thanks to others, I’m well on my way to a full recovery. But this was the main reason I booked a one-way ticket to Bali and didn’t think twice.

I was getting up at the crack of dawn every morning, to commute to a recruitment job in London that I hated. To help me fund things I didn’t really enjoy doing. Just to repeat week on, week out (eventually I was forced to quit due to my mental health). It was utterly soul-destroying. We’re conditioned by our parents and the education system that we need a good degree to get that ‘9-5’ job (more like 8-7) to earn money for a mortgage, our bills and all that adulting. It may mean getting a job that you don’t enjoy.

But life isn’t really like that anymore, or at least it doesn’t have to be. Travelling was a chance for me to get my mental state back in one piece after it almost killed me. Still, it was also a chance to try and do something worthwhile at the same time away from the stresses of mortgages, bills, and keeping everyone happy with my career choices. I’m now making money online freelance writing for all kinds of different clients for websites, magazines and books. Meaning I can continuously fund my travels doing something I love. I’m not saying freelancing is for everyone. However, there’s a hell of a lot more to life than getting the 6:50am South West Trains service every morning, and join the rat race with the others who probably also hate their jobs. Or at least don’t enjoy them enough for it to be worth it.

I’ve only been travelling for a few weeks, but it has already massively put things into perspective. The culture in Asia is wildly different to anything back in England, and it’s fascinating hearing about the local’s lives. The average salary out here is minimal, and everything is ridiculously cheap. The locals know that to us what they are selling is cheap, but no one seems to mind. I was speaking to a local who sells cakes on the beach, making next to nothing to support his family. I couldn’t stop talking about how much he loved life. Yet, I don’t think I ever heard the same things Londoners who were already on ten times his yearly salary in their first job out of University.

Even if I wasn’t freelancing out here, it’s just nice to travel. Although it is easy to see it as a ‘boozy gap year’, there’s a lot more to it than that if it’s done correctly. It’s a relief to get away from the craziness of London and leave all the stresses behind. A month’s rent for that broom cupboard ‘apartment’ you’re paying for in London would probably get you a decent-sized castle out here.

I’m entirely free to go wherever I want when I want. The joy of freelancing means I can also work when I want, without some hard-ass manager breathing down my neck every day about sales targets and KPI’s. I know I’m over-generalising and I’m sure plenty of people love their jobs and have great bosses. Still, hardly any of my friends are doing something that they’re passionate about. They’ve just got the first job they could find, which has in the majority of cases been in recruitment. We’re only young once (I love cliches). I know that one day I’m going to have to get serious with my life, but it’s nice to have been able to get away for a bit and think about what I really want to do.

I’ve never really ‘come out the closet’ about the struggles with depression, so I guess this is kind of that. Travelling has made me realise that I’m really not that bothered anymore. I was too scared people would think I had a few too many screws loose and needed to be locked up somewhere. Travelling has this amazing ability to strip away all the daily stresses and anxieties that are present in modern society. Everyone at some point in their lives should take the time to travel, for whatever their own personal reasons may be, even if it’s just to have a boozy gap year.

For me, it’s a chance to ‘fix’ myself and figure out what’s next. I hadn’t planned for my mental setbacks over the last couple of years. Although I hadn’t prepared for it, I’m weirdly grateful. It’s allowed me to do something I’d never thought about doing before and seeing what the world has to offer. Probably much more than the small and busy bubble of London that I’ve lived in my whole life.

If you feel like you want to die, it’s important to tell someone. Help and support is available right now if you need it. You do not have to struggle with complicated feelings alone. The following helplines are available if you’re feeling down and desperate: CALM, Samaritans, Papyrus, Childline

If you’re interested in other stories about travel, Francis Henderson shares about his thoughts on how travel can open your perspectives. Camille Van den Bogaert fought her own struggles in order to find her passion. 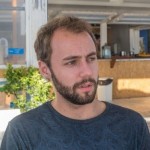 Find me on: Web