Home » The Art of Travel

Inspired by Alain de Botton’s book “The Art of Travel”, Mona Hakim discovers the purpose of travel. Especially, how travel acts as more than a form of escapism and sets the stage for discovery

A few years ago, my roommate lent me her dad’s copy of Essays in Love, the first novel of the pop-philosopher turned entrepreneur, Alain de Botton. It was the first work of fiction that I mentally consumed after what I can only reasonably describe as an unplanned hiatus from reading for pleasure. I read it in less than a week on my commute to and from work on the tube.

One morning, standing on the periphery of a socially constructed circle of loud American tourists, I chuckled so audibly that one of them turned to me and asked jovially, ‘Is it a good read?” Absolutely! It’s hilarious!’ I exclaimed: always a sucker for underground interaction – whether it’s legitimate or not, as I assume tourists aren’t fair play. No sooner had I exploded with my admiration for the comical virtues of the book, than did I hastily rush to qualify myself, ‘Oh, but incredibly clever and intricately constructed too!’ She nodded with a candid smile and replied, ‘Okay, I’ll check it out.’

Appropriately, then, when I directed a tweet at Alain de Botton explaining that because I had been so enthralled by “Essays in Love”. I was too scared to pick up any of his other books, he recommended The Art of Travel. (I used to be far less nonchalant about our Twitter communication. But have since lost most of my love for him since he launched The School of Life, what I see as the ironic extremist liberalist project.)

The Art of Travel, nevertheless, resonated with me. It explores the reality that people all too often expect to be cured of the endemics of the quotidian through travel for pleasure. Or perhaps self-discovery in millennial equivalence. For as long as I can remember being cognitively advanced enough to consider meta-ideas I have wrestled with this idea of travel. Why do we do it? Is there something wrong with where we are? Are our lives not fulfilling enough? I know that this is a heterodox view, and, of course, I understand the romantic value of getting lost in an unexplored towns amongst unrecognisable faces.

When I accumulate all of the ingredients that comprise my thoughts on travel and leave them to simmer in some cerebral oil, the superfluous evaporates, leaving me with one fundamental question. Given that you are you – I am here assuming a substrate of constant identity, for better or for worse – what is the essential point of travel? If I feel an overwhelming emptiness wherever I am today, why would I feel more full with my feet treading an alternative terrain? This question only intensified when I moved from London to a small town south of Amsterdam. As if determined to quench my curiosity on the underlying purpose of travel.

Universiteit Leiden is the oldest university in the Netherlands. One friend described the town as ‘so Dutch it’s almost racist,’: hyper-picturesque, canals that stretch between the cobbled streets and reflect the image of trees or tall buildings, and loud students with an appetite for fun – to keep it real. No surprise then that it attracts many international students. The Netherlands is known, amongst other things, for its progressive employment laws, education system and social welfare. No surprise then that it also attracts labour from abroad. Being surrounded by a diverse student community and international coworkers, has engendered various considerations.

At first, I wondered whether travel is a form of escapism. Escape from financial restraints, escape from emotional shackles; escape from the mundane, escape from the overwhelming. But is art not also a form of escapism: reading, experiencing colour, listening to music etc.: so why re-root yourself? Perhaps it is something to do with how man-made society is structured to penetrate some of us so profoundly that we are unable to escape through art. So we desperately try to regroup and re-attempt to catch some kind of break.

Amidst the break though a looming thought might approach: run where you will, your mind will relentlessly try to force you to confirm your identity. But identity is not something that we can just confirm or deny at any given moment. Many thinkers argue that identity is entirely constructed. I am somewhat inclined to agree. Though I also feel compelled to believe that there is something permanent that remains within all of us.

The purpose of travel then is to allow us to further develop the additional components that we can use to explain ourselves to ourselves. Or to discover ourselves. That said, is it necessary to pick ourselves up and begin the construction away from “home”? Surely, a trip to the other side of your hometown, a conversation with a stranger, could contribute towards your development of self as well as a trip to the other side of the world. I am not deflating, then, the value of travel. I am merely conflating the importance of opening ourselves up to the insightful experiences that could be much closer to us than we ever care to consider. It’s not where we are, it’s how – open – we are that sets the stage for self-discovery, whenever.

Mona isn’t the only writer who has discovered her “art of travel”. George Bell was able to escape from his depression and find himself through travel. Francis Henderson, through his art of travel, has realised that travelling opens you up to different perspectives. Serge Kabanda discovered his Rwandan heritage when travelling to his parents’ home. 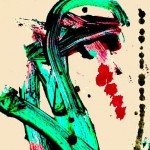